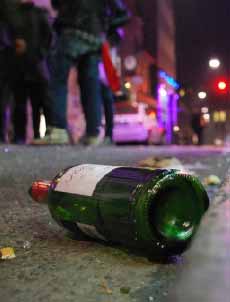 Scenario: You’re on holiday. You drink heavily. What are the factors that might contribute towards a hangover? Such a question was asked by researchers Morten Hesse and Sébastien Tutenges of the University of Aarhus, Centre for Alcohol and Drug Research, Copenhagen Division, Denmark, who performed a 2010 observational prospective study with a total of 112 young Danish tourists. They were interviewed on three occasions during their holiday, and completed the Acute Hangover Scale (AHS) –  answering questions about their alcohol consumption and rest duration. The results:

“Hangovers after heavy drinking during holidays appear to be related both to amount drunk and time into the holiday.”

“Drawing on the classical crowd theories of Tarde, Le Bon, Durkheim, and Canetti, this article examines pub crawl crowds at the Bulgarian nightlife resort, Sunny Beach. The article argues that there are elements in classical crowd theory which can be used to advance the current research on tourist crowds such as those at pub crawls.“ [our hyperlink]

Note: The photo is part of a montage by professor Tutenges entitled ‘Designing Drunkenness’ a presentation for Club Health 2013.