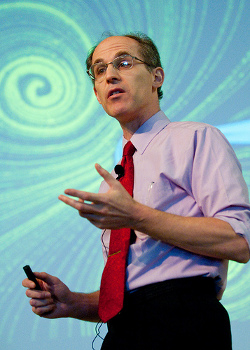 The G K Batchelor Prize for 2016 is awarded to Professor Raymond E. Goldstein FRS, Schlumberger Professor of Complex Physical Systems in the Department of Applied Mathematics and Theoretical Physics and Fellow of Churchill College, University of Cambridge.

The Prize was awarded after an international panel of experts considered nominations, over 150, received from researchers worldwide. This prestigious prize, sponsored by the Journal of Fluid Mechanics, is awarded every 4 years at the International Congress of Theoretical and Applied Mechanics to recognise the achievements of an active scientist who has made significant research contributions to fluid mechanics over the previous decade….

Professor Goldstein has served on various professional panels and committees as well as the editorial boards of several peer-reviewed journals. He is a Fellow of the Royal Society and American Physical Society, and has received several prizes in recognition of his work, including the 2012 Ig Nobel Prize.

The 2012 Ig Nobel Prize for physics was awarded to Joseph Keller, and Raymond Goldstein, Patrick Warren, and Robin Ball, for calculating the balance of forces that shape and move the hair in a human ponytail.