Dr. Anne A. Madden, the 2015 Luxuriant Flowing Hair Club (LFHCfS) Woman of the Year, is part of the team that made a beer-related breakthrough in the study and manipulation of yeast. Dr. Madden is pictured here (in a photo by Lauren Nichols), examining yeast cultures: 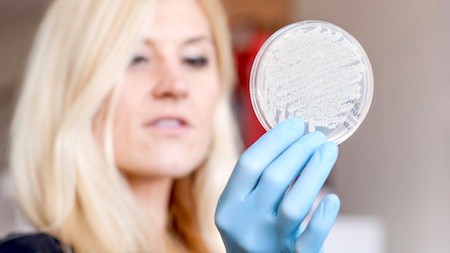 Dr. Madden will make a special appearance next week in the Twenty Fifth 1st Annual Ig Nobel Prize ceremony. The ceremony will be webcast live.

From the Lab Bench to the Beer Glass

When John Sheppard was asked to brew beer from wild yeast, he was skeptical. Humans, after all, have been brewing beer for millennia. If there were yeasts out there that could make a good pint, they would surely have been found years ago. But, it turns out, Sheppard proved himself wrong….

But Sheppard was willing to give it a shot, and so he reached out to [NC State biologist Robb] Dunn. The biologist, in turn, reached out to the people in his research group to see if they had any ideas. One of those researchers was Anne Madden.

Madden is a postdoctoral microbiologist affiliated with both Dunn’s lab at NC State and Noah Fierer’s lab at the University of Colorado. In her official capacity as a postdoc, she studies the microorganisms of the “built environment” – particularly, how insects and other arthropods introduce microorganisms to homes, workplaces and other buildings. She is, in other words, an expert on the microscopic organisms that live on insects…. [You can read the entire story on the NC State web site.]