The Luxuriant Flowing Hair Club for Scientists (LFHCfS) proudly announces its Woman and Man Of The Year for 2015. The two terrifically-tressed scientists are, respectively, an American researcher who studies microbes that live in paper wasp bodies and nests, and a British researcher who plumbs the mysteries of critical illnesses. 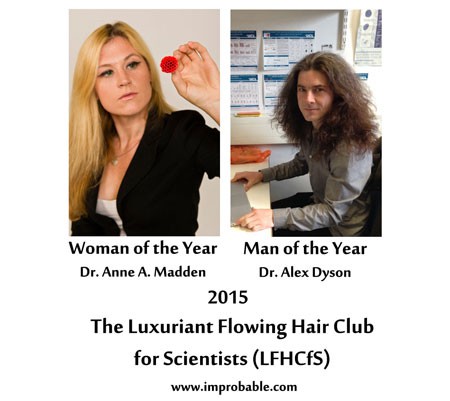 Here is thrilling detail about each of them.

Woman of the Year: Dr. Anne A. Madden, LFHCfS

Dr. Madden is a microbial ecologist who specializes in microorganisms associated with wasps. She is a Sloan Foundation Microbiology of the Built Environment Postdoctoral Research Fellow, at North Carolina State University and Colorado University, having received her Ph.D from Tufts University in Massachusetts. She also works on identifying wild yeasts with novel flavor profiles for brewing beer.

As my hair is a natural dark red brown, it is a testament to modern science, and particularly chemistry, that it is now this bright, blond color. Yay applied science! It’s an honor to receive an award that highlights how delightfully absurd and accepting our community can be. Science is a place where you can revel freely in doing serious work, all the while dressing however you please. This is what science looks like: science looks like everyone.

Dr. Dyson is a Clinical Physiologist at University College London, studying the mechanisms underlying critical illness states (such as ischaemia/reperfusion injury). He is currently working to develop a drug that will hopefully prevent chronic heart failure following acute myocardial infarction (heart attack). The drug is “pretty funky” and works by decreasing metabolism, akin to hibernation or suspended animation.

You can hear Dr. Dyson discussing his work in a Clinical Science Podcast, embedded below.