This medical case report explains how difficult it can be to separate an adult man from a treasured toy:

“A 68-year-old man presented to the emergency department with severe lower abdominal discomfort, distension and inability to pass urine, flatus or bowel motions. He had inserted a phallic object in the rectum 10 hours prior to presentation and had been unable to remove same….

“The method of removal of phallic objects varies from one individual case to another. In the presence of obstruction, a quick decision must be made for removal under general anaesthesia and the patient will also need to be consented for laparotomy. Previous literature described a “cork-in-bottle” technique using myomectomy screws [pictured below] as well as use of single-incision laparoscopic surgery (SILS) ports for removal of phallic objects….

“Extraction of phallic objects requires ingenuity. We describe another minimally invasive technique of removal that adds to the literature, thereby limiting the need for laparotomy and open removal of foreign bodies.”

Here, for reference, is a photo of a myomectomy screw: 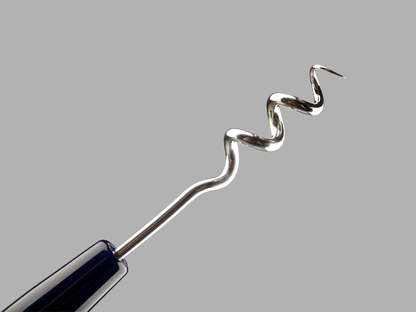