Willard discoursed about how certain snakes, including boids, coil around prey:

“Geometry limits to four the ways a snake can coil around its prey: venter toward the prey, dorsum toward the prey, left lateral side toward the prey and right lateral side toward the prey. However, snakes’ anatomies further limit the ways with which constriction can be effective. No snake can make a circle of sufficiently small diameter to apply pressure to a prey by coiling, dorsally and the minimum size of the circle achieved by ventral coiling is also prohibitively large, although it is sometimes used on the first coil among some boids. Only two options are left: those employing the lateral surfaces. By using only the lateral surfaces snakes may wrap themselves either with the dorsum toward the head (Fig. 1) or venter toward the head (Fig. 2). No individual or species was noted to prefer either the left side or right side.” 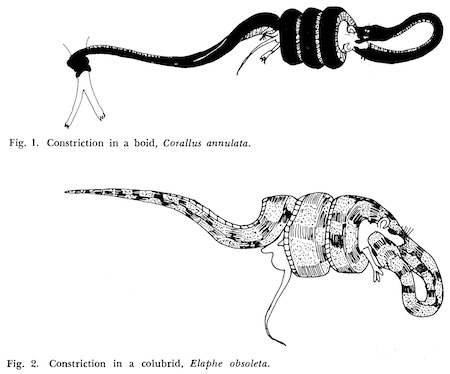