There’s news about soggy-cereal research — a study called “Crunchiness Loss and Moisture Toughening in Puffed Cereals and Snacks,” by Micha Peleg, published in the Journal of Food Science, epub July 29, 2015.

Peleg, at the University of Massachusetts, builds on the research of — among others — 1995 Ig Nobel Nutrition Prize winners D.M.R. Georget, R. Parker, and A.C. Smith of the Institute of Food Research, Norwich, UK. Georget, Parker, and Smith were awarded that prize for their rigorous analysis of soggy breakfast cereal, called “A Study of the Effects of Water Content on the Compaction Behaviour of Breakfast Cereal Flakes“. The Georget/Parker/Smith paper was published in the journal Powder Technology in 1994. (That particular Ig Nobel Prize drew an unexpected reaction from the then-chief scientific advisor to the British government.)

Peleg reports, in his new study: 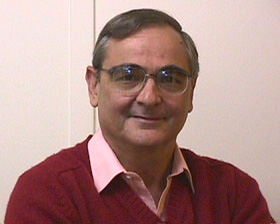 “Upon moisture uptake, dry cellular cereals and snacks loose their brittleness and become soggy. This familiar phenomenon is manifested in smoothing their compressive force–displacement curves. These curves’ degree of jaggedness, expressed by their apparent fractal dimension, can serve as an instrumental measure of the particles’ crunchiness. The relationship between the apparent fractal dimension and moisture content or water activity has a characteristic sigmoid shape. The relationship between the sensorily perceived crunchiness and moisture also has a sigmoid shape whose inflection point lies at about the same location. The transition between the brittle and soggy states, however, appears sharper in the apparent fractal dimension compared with moisture plot. Less familiar is the observation that at moderate levels of moisture content, while the particles’ crunchiness is being lost, their stiffness actually rises, a phenomenon that can be dubbed “moisture toughening.” We show this phenomenon in commercial Peanut Butter CrunchR (sweet starch-based cereal), Cheese Balls (salty starch-based snack), and Pork Rind also known as “Chicharon” (salty deep-fried pork skin), 3 crunchy foods that have very different chemical composition.”

Here’s further detail, about force and strain in cheese balls, from Peleg’s study: 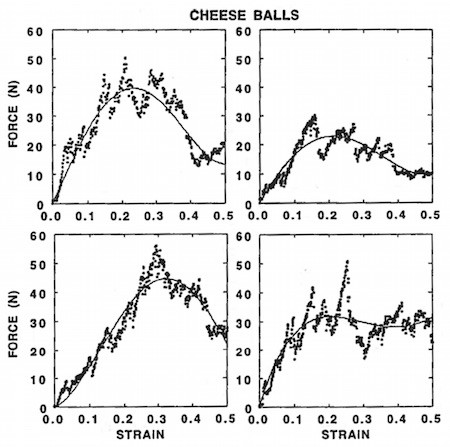 Alexandra Ossola reports on the report, in Popular Science, under the slightly exaggerated headline “SCIENCE FINALLY UNDERSTANDS HOW CEREAL GETS SOGGY“.

(Thanks to Jennifer Ouellette for bringing this to our attention.)

Independently, an inventor named Michael Roberts developed a cereal bowl that is said, commercially, to prevent cereal from becoming soggy. Inventor Roberts and his colleagues advertise this bowl under the brand name Obol. Here is their story, as told by them or persons acting at their behest, in the form of a commercial that does not explore so very much the time element that inevitably figures into the story of soggification: