Postal workers have no sense of humor, according to an odd stereotype that mutters around the Internet. But, with a few exceptions, it’s not true. The National Association of Letter Carriers has a newsletter called Postal Record. Postal Record‘s April 2011 issue has an article called “Unsigned, unsealed… DELIVERED — Experimenter tests USPS’s sense of humor. The article begins: 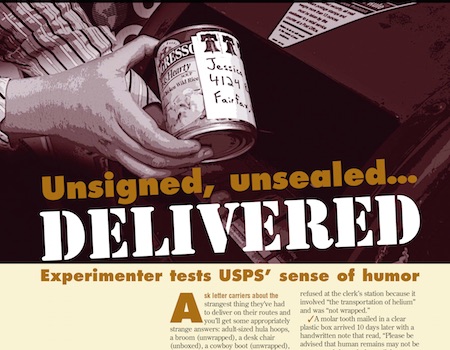 “Ask letter carriers about the strangest thing they’ve had to deliver on their routes and you’ll get some appropriately strange answers: adult-sized hula hoops, a broom (unwrapped), a desk chair (unboxed), a cowboy boot (unwrapped), a large homemade cookie with the address written in icing, and every conceivable kind of bug or small animal. Some carriers even deliver human remains and body parts. It seems like anything that can be shipped probably has been.*

Jeff Van Bueren decided to put that idea to the test. Writing in The Annals of Improbable Research, a humorous science-based magazine, Van Bueren tested the Postal Service by mailing an assortment of strange and unwieldy objects—usually unpackaged—to see if they’d get through. He was surprised at his high success rate:

✓ An in-bloom rose with a tag attached to the stem arrived at the address three days later with the beaten-up bud still attached.

You can read the entire Postal Record article online.