“As electronics devices become increasingly powerful and smaller, powering these devices has become a significant concern. It may be troublesome to find compatible power sources when a user is frequently mobile and devices often require multiple recharges per day.”

There’s now a new energy-harvesting solution to the problem – the chew-powered fake-tooth piezoelectric generator. It’s the subject of a new (03 June 2015) US patent from inventors Thomas R. Trumbull and Timothy P. Johnston of Los Gatos, California. 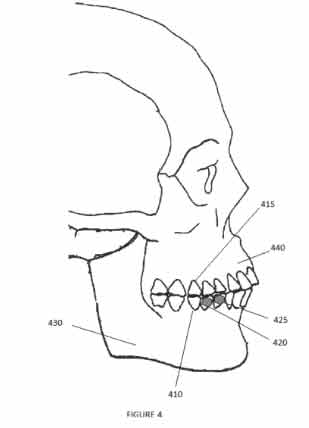 “The apparatus may be implemented in an artificial tooth or fake tooth such as a pontic. In this embodiment, the artificial tooth may comprise a first portion configured to be fixed with respect to a user’s upper jaw or the user’s lower jaw, a second portion configured to be movable with respect to the first portion and an electric generator adapted to generate electric energy from relative motion between the first portion and the second portion.” 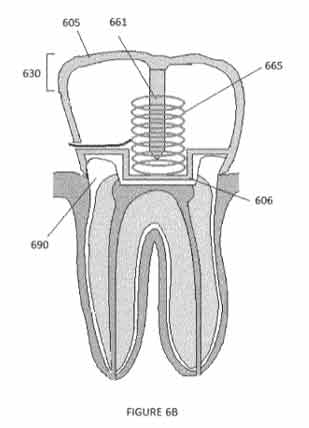 “Mechanically stressing the portion of the electric generator comprises at least one of opening a human jaw, and closing the human jaw. The method may further comprise storing the electric energy in a battery.”

Note: Los Gatos (literally: ‘The Cats’) is not far from Mount Umunhum (literally: ‘Resting Place of the Hummingbird’).