Although many species of frog have been scientifically classified by smell (a feat honored by the 2005 Ig Nobel Prize in biology), relatively few ants have been so analyzed. That situation has now begun to be remedied. This study

“The True Odor of the Odorous House Ant,” Clint A. Penick and Adrian A. Smith, American Entomologist, vol. 61, no. 2, Summer 2015, pp. 85-87. (Thanks to Matt Shipman for bringing this to our attention.) The authors, at North Carolina State University and the University of Illinois at Urbana-Champaign, report: 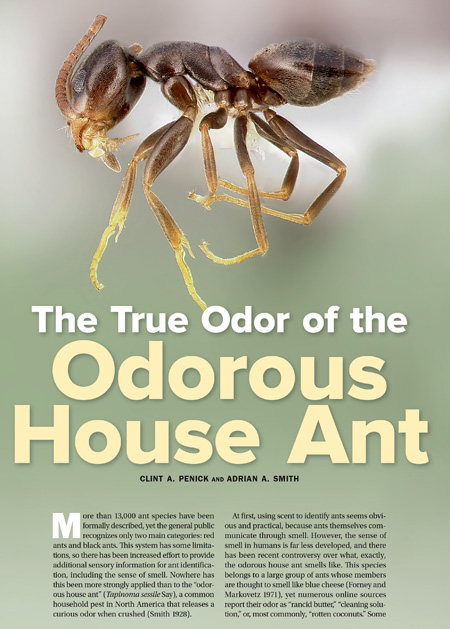 This species belongs to a large group of ants whose members are thought to smell like blue cheese, yet numerous online sources report their odor as “rancid butter,” “cleaning solution,” or, most commonly, “rotten coconuts.” Some sources have even gone so far as to rename the odorous house ant the “coconut ant.” … We investigated the volatile compounds released by the odorous house ant and the foodstuffs most commonly associated with their scent….

So what does the odorous house ant smell like? Our results point to blue cheese, with a cautious nod to rotten coconut.