Friday June 5th, 2015 is the 20th edition of Dead Duck Day, arriving precisely one year after last year’s Dead Duck Day. At exactly 17:55 h [Rotterdam time] we will honor the mallard duck that became known to science as the first (documented) ‘victim’ of homosexual necrophilia in that species, and earned its discoverer the 2003 Ig Nobel Biology Prize.

Dead Duck Day also commemorates the billions of other birds that die from colliding with glass buildings, and challenges people to find solutions to this global problem.

Please join the free, short open-air ceremony next to the new wing of the Natural History Museum Rotterdam (the Netherlands), right below the new Dead Duck Memorial Plaque— the very spot where that duck (now museum specimen NMR 9989-00232) met his dramatic end.

This is what will happen:

The introduction of the new Dead Duck Day logo and the ‘Dead Duck Day fashion line’, designed by Mark Prinsen.

A tribute to the recently deceased Robert W. Dickerman (1926), the biologist who discovered homosexual necrophilia in ground squirrels in 1959, and gave necrophilia a good name.

The announcement of the performance of ‘The Homosexual Necrophiliac Duck Opera’ at the Tête à Tête Opera Festival in Londen, 8/9 August 2015.

A six-course duck dinner, after the ceremony

The traditional six-course (dead) duck dinner at the famous Tai Wu Restaurant is also open to the public (at your own expense).  Reserve you seat by e-mailing to: info [at] hetnatuurhistorisch.nl 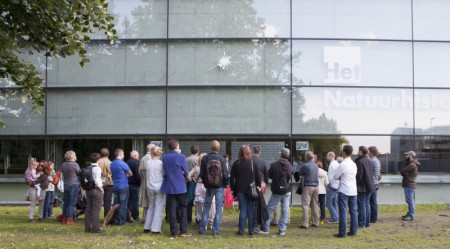