A trio of theoretical physicists have recently used ideas from statistical mechanics and probability theory to try to develop an optimal strategy for capturing a skittish lamb near a precipice.

The situation that they model is an idealization of “the capture of a diffusing, but skittish lamb, with an approaching shepherd on the left and a precipice on the right.” They approached this problem by examining first-passage probabilities, which describe the first time of some event (e.g., a lamb falling off of a cliff) occurring. The physicists summarized their strategy as follows:

In particular, the probability to capture the lamb is maximized when the shepherd moves at a non-zero optimal speed if the initial lamb position and the ratio between the two boundary speeds satisfy certain conditions. 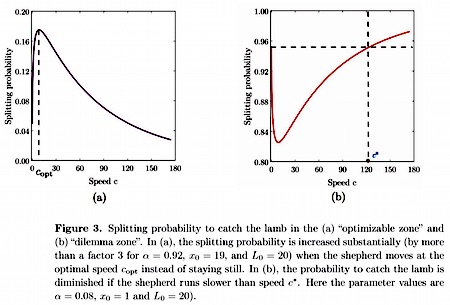 One of the physicists, Sid Redner, works at the Santa Fe Institute, so perhaps the next problem he’ll attempt is to design a strategy to help Wile E. Coyote catch the Roadrunner.

BONUS: Redner on the question: In a pro basketball game, when is a lead safe?