The new television series Supergirl [see below] shows the continuing public hunger to have flying superpersons. Thirty years ago, this hunger was very slightly served by a patented invention:

Here are technical drawings from the patent: 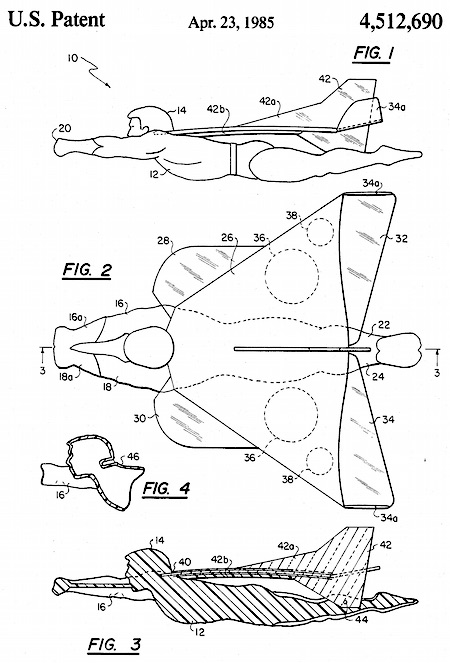 Further detail, about the detail you see in the drawings:

A number of fantasy super heroes have been created particularly in the comic strips and in comic books to which many children readily relate. These figures, which include such heroes as “Superman”, “Captain Marvel”, “Superwoman”, “Mightly Mouse”, and others wear a cape and in their world of fantasy have the capability of flying through the air. Some attempts have been made in the past to make gliders of such figures. These, however, have been unsuccessful due to the inadequate support capability of the wing structure of the cape configuration.

A wing structure for the figure is constructed of a sandwich construction having a primary or opaque cape configuration 26 which, as can be seen in FIG. 2, has a somewhat triangular outstretched cape configuration. This portion of the wing structure is preferably opaque and has the color and configuration of the cape of the particular super hero when the cape is in the outstretched flying configuration for the particular figure. In order to improve the flying capability of the figures, in accordance with the invention, forwardly extending transparent extensions 28 and 30 extend forward of the leading edge of the cape portion 26 to extend and expand the wing area of the figure. Additional trailing transparent wing extensions 32 and 34 are provided to further increase the wing surface area and to provide, as can be seen in FIGS. 1 and 3, a somewhat trim tab construction. With this wing construction, the transparent portions 28, 30, 32 and 34 essentially disappear from view as the figure flies through the air giving the distinct impression of the super hero in flight supported solely by his visible cape 26.

Behold the teaser for Supergirl:

The patent, filed in 1983, may have helped fuel (or perhaps was itself fueled by news of) the movie Supergirl, which was released in 1984. Here’s the trailer for that movie:

BONUS (possibly unrelated) The trailer for the movie Superfly: