Innocuity is now a recommended goal in naming a disease. “Discovered a disease? WHO has new rules for avoiding offensive names” is the headline on a report by Kai Kupferschmidt, in ScienceInsider. It says, in part:

The World Health Organization (WHO) mostly works to reduce the physical toll of disease. But last week it turned to another kind of harm: the insult and stigma inflicted by diseases named for people, places, and animals…. 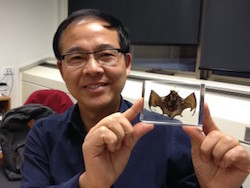 Many scientists agree that disease names can be problematic, but they aren’t sure the new rulebook is necessarily an improvement. “It will certainly lead to boring names and a lot of confusion,” predicts Linfa Wang [pictured here], an expert on emerging infectious diseases at the Australian Animal Health Laboratory in Geelong….

Giving new diseases a number may be the only way to avoid such issues, researchers say. There is precedent. Growing up in China in the late 1960s, Wang remembers that diseases had digits. “I was really scared of number 5 disease,” he recalls. “I don’t know why, you just really did not want to get disease number 5.”