Since David B. Busch and James R. Starling, won the 1995 Ig Nobel Literature prize for their deeply penetrating 1986 research report, “Rectal foreign bodies: Case Reports and a Comprehensive Review of the World’s Literature” the body of literature on the subject and the number of cases has increased considerably. By 2012, no less than 589 reports on these inconveniences have been published. All cases, however, refer to humans. But now a paper has come to our attention that details the first documented case of a rectal foreign body in a 65 million year-old sea urchin from Denmark. 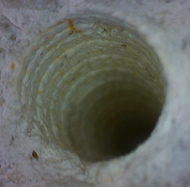 Jesper Milan, Bo W. Rasmussen and Lothar H. Vallon of Geomuseum Faxe and Natural History Museum of Denmark report ‘An unusual taphocoenosis of a sea urchin and a rectally inserted turriform gastropod from the lowermost Paleocene of Stevns Klint, Denmark’ in New Mexico Museum of Natural History and Science Bulletin 67 (2015): 231-234:

When asked about the significance of this discovery, Jesper Milàn answered by e-mail:

… it might be of some comfort for the unfortunate people who had to take the long walk to the doctor, to know it has happened to sea urchins long before any humans were present on the planet.