“Rogue Microwave Ovens Are the Culprits Behind Mysterious Radio Signals” is the headline on Nadia Drake’s article in the Phenomena blog. Drake writes: 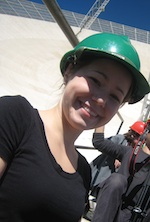 “It was quite surprising that it ended up being microwaves,” says study author Emily Petroff [pictured here] of Australia’s Swinburne University of Technology.

For years, astronomers had been puzzled by these brief but intense bursts of radio waves that in some ways appeared to be coming from deep space. There have been dozens of reported perytons, some dating back to the 1990s… perhaps unsurprisingly in retrospect, the peryton data show those signals “clustering near the lunchtime hour.”