Of the many and varied possible solutions offered to explain the French Paradox, wine drinking is perhaps the most common. (examples: [1] [2] ) But not everyone is 100% convinced that the paradox has been resolved once and for all. Some say, perhaps it’s not wine, maybe it’s cheese? A new study (undertaken jointly by the Department of Food Science, Aarhus University, Denmark and the Department of Nutrition, Exercise and Sports, University of Copenhagen, Denmark) is published in JACS’ Journal of Agricultural and Food Chemistry, 2015, 63 (10), pp 2830–2839, and is entitled : 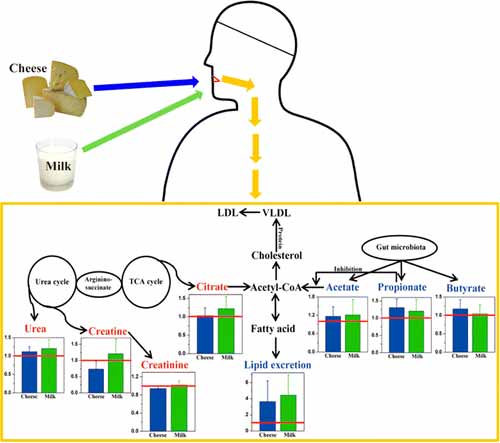 “An NMR-based metabolomics approach was used to investigate the differentiation between subjects consuming cheese or milk and to elucidate the potential link to an effect on blood cholesterol level. Fifteen healthy young men participated in a full crossover study during which they consumed three isocaloric diets with similar fat contents that were either (i) high in milk, (ii) high in cheese with equal amounts of dairy calcium, or (iii) a control diet for 14 days. Urine and feces samples were collected and analyzed by NMR-based metabolomics. Cheese and milk consumption decreased urinary choline and TMAO levels and increased fecal excretion of acetate, propionate, and lipid. Compared with milk intake, cheese consumption significantly reduced urinary citrate, creatine, and creatinine levels and significantly increased the microbiota-related metabolites butyrate, hippurate, and malonate. Correlation analyses indicated that microbial and lipid metabolism could be involved in the dairy-induced effects on blood cholesterol level.”

Future work might investigate whether combinations of wine with cheese could further shed light on the French Paradox.