Two recent, imaginative, slimy experiments are advancing our knowledge of how to use bacteria to make possibly-healthgiving foods.

The newest is reported by Janet Jay, writing in Motherboard:

How to Make Breakfast With Your Vagina 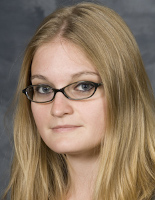 … Cecilia Westbrook [pictured here] is a friend of mine, and an MD/PhD student at the University of Wisconsin, Madison. We had joked before about making yogurt from vaginal secretions…. Curiosity piqued, Westbrook began to research in earnest. What choice did she have but to try it herself?

Every vagina is home to hundreds of different types of bacteria and organisms. These organisms—collectively known as the vaginal community—produce lactic acid, hydrogen peroxide, and other substances that keep the vagina healthy. The dominant bacteria is called lactobacillus, which also happens to be what people sometimes use to culture milk, cheese, and yogurt….

A slightly earlier experiment, in Spain, resulted in the awarding of the 2014 Ig Nobel Prize for nutrition to Raquel Rubio, Anna Jofré, Belén Martín, Teresa Aymerich, and Margarita Garriga, for their study titled “Characterization of Lactic Acid Bacteria Isolated from Infant Faeces as Potential Probiotic Starter Cultures for Fermented Sausages.” They published details of their experiment, in the journal Food Microbiology, vol. 38, 2014, pp. 303-311.