“Shark teeth both pierce and cut their prey, which is viscoelastic and structurally and materially heterogeneous. We propose a device for testing the function of shark teeth in a biologically relevant context with respect to their movement relative to the prey. We used this device to test whether tooth shape has an effect on cutting efficiency on a large actinopterygian prey item (salmon) and how quickly teeth dull. Teeth from four sharks, tiger (Galeocerdo cuvier), sandbar (Carcharhinus plumbeus), silky (C. falciformis), and sixgill (Hexanchus griseus), were attached to 30.5cm straight saw blades with epoxy. Each blade was mounted in a reciprocating saw and applied to a chum salmon with constant force. Published data report that Carcharodon carcharias shakes its head at 0.5Hz (~15cm/s). Our saw moved the teeth 35 cm/s. Our ‘bite force’ was substantially below that reported for sharks, due to of limitations of our system. There was not a significant effect of tooth shape on the area of prey cut per linear distance traveled. The mean area cut per cm traveled across all tooth shapes was 69 cm^2/cm. There was a significant effect of repeated use on cutting speed. After 12 reciprocations, a tooth cut only 7% of the tissue it cut on the first 6 reciprocations (at 5.7cm/reciprocation). This rapid dulling is enhanced by the high speeds at which we are cutting, as the fish tissues appear much stiffer at high strain rates. Sharks have very rapid tooth replacement and we propose this is driven by the speed of dulling from use.”

(Thanks to investigator Paula Gramm for bringing this to our attention.)

Here is a photo of Adam Summers, the final-named author of the study, engaged in a different activity: 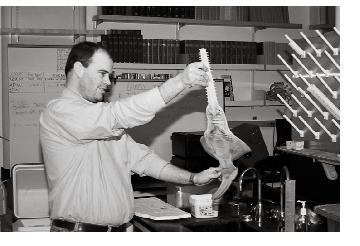