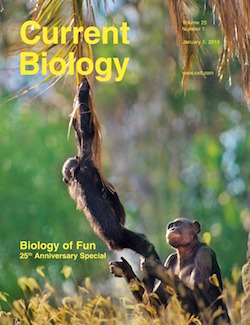 Geoffrey North, the journal’s editor, wrote an editorial called “The Biology of Fun and the Fun of Biology“:

Both [the artist] Magritte and [the artistic chef] el Bulli illustrate one aspect of ‘fun’ that is relevant to Current Biology — and that is the element of surprise…. One thing Current Biology is known for is being rather unpredictable; people often tell us we are a bit ‘quirky’, and they generally mean this as a compliment. This likely relates to the ‘pleasure of novelty’: it is a common experience that when something, even a great work of art, is experienced too often within a short period of time, the pleasure evoked strongly diminishes.
The idea of ‘fun’ in work does not necessarily imply frivolity, or triviality — fun can be had in work that results in a Nobel Prize (theoretical physicists, such as Richard Feynman, seem particularly prone to this), as well as that rewarded with an Ig Nobel Prize. And interestingly, the latter has evolved into a worthy prize: a paper we published in 2013 [Current Biology, 2013, R298–R300.] was awarded an Ig Nobel Prize, and as one of the authors of that paper, Marie Dacke, explained in her Q & A last year [Current Biology, 2014, R546–R547.], the prize is now awarded for “research that first makes people laugh and then makes them think”, which has to be a wholly good thing.

Ridicule is always a question of perspective…. This perspective-dependent combination of seriousness and oddity is what keeps the Ig Nobel Prizes in business. These prizes are celebrated just before the less entertaining Nobel Prizes and have been going strong since 1991, just like Current Biology. The 2014 honour roll includes, for instance, work about the behavioural reaction of Svalbard reindeer to humans dressed up as polar bears (or not – you always have to include a control experiment), the mental health hazards of keeping cats, pain sensitivity of people looking at good or bad paintings, and dogs aligning with the Earth’s magnetic field when defecating (https://improbable.com/ig/ig-pastwinners.html).
Surely, each of these research projects was based on a reasonable question and may even have yielded valuable results. The scientists in question may not have appreciated at the beginning that a one-line description of their activity might look faintly ridiculous, especially if reported by media around the world. Still, recipients of the Ig Nobels typically attend the ceremony in good spirit and may ultimately benefit from the extra publicity for their work which might have otherwise fallen into oblivion quite fast…. 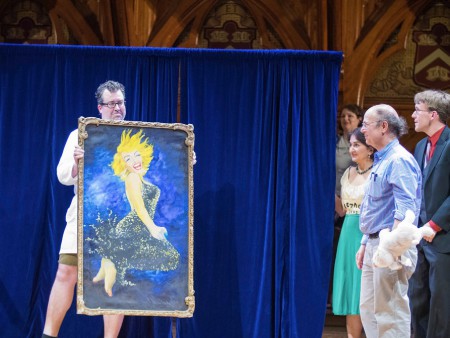 Ig Nobility: The annual Ig Nobel Prizes aim to “first make people laugh, then make them think.” In 2014, the art prize was awarded to Marina de Tommaso, Michele Sardaro and Paolo Livrea of Italy, for measuring the relative pain people suffer while looking at an ugly painting, rather than a pretty painting, while being shot in the hand by a powerful laser beam. The photo shows Nobel laureate Frank Wilczek, who helped hand out the Ig Nobel Prizes to the new winners at the 2014 Ig Nobel Prize ceremony at Harvard, being exposed to an ugly painting. (Photo: Alexey Eliseev/Improbable Research.) [to see an enlargement, click on the image]

This year will, indeed, also see the 25th birthday of the Ig Nobel Prize ceremony. The 25th First Annual Ig Nobel Prize Ceremony will happen on Thursday, September 17, 2015. You are invited to attend the festivities at Harvard University (should you manage to obtain a ticket) or to watch the live webcast.