Investigator Mason Porter sent us this note, about a study he noticed:

The thing that strikes me about this paper is the first sentences of the abstract — just about the most poetic initial sentence that I have ever seen in an abstract of a scientific paper.  So one thing that could be interesting (to me, at least) would be what other papers out there in the ether have similarly compelling or poetic initial sentences? The subject of fluid mechanics isn’t typically my cup of tea (er, coffee).  [I had to get that in there.]

When drinking a cup of coffee under the morning sunshine, you may notice white membranes of steam floating on the surface of the hot water. They stay notably close to the surface and appear to almost stick to it. Although the membranes whiffle because of the air flow of rising steam, peculiarly fast splitting events occasionally occur. They resemble cracking to open slits approximately 1 mm wide in the membranes, and leave curious patterns. We studied this phenomenon using a microscope with a high-speed video camera and found intriguing details: i) the white membranes consist of fairly monodispersed small droplets of the order of 10 μm; ii) they levitate above the water surface by 10∼100 μm; iii) the splitting events are a collective disappearance of the droplets, which propagates as a wave front of the surface wave with a speed of 1∼2 m/s; and iv) these events are triggered by a surface disturbance, which results from the disappearance of a single droplet. 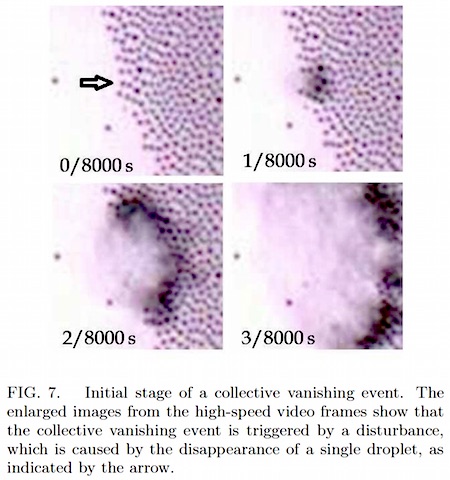