Some scientists study curiosities in their fellow scientists, as well as curiosities in the rest of nature. Laura Gardner studied Chris Miller, a professor of biochemistry at Brandeis University who studies all sorts of things. Miller delights in studying several, apparently related, sorts of scientist. Writing in Brandeis magazine, Gardner’s profile of Miller appears under the headline “An Epistemology of Scientific Crackpottery“. Here’s a small chunk of it: 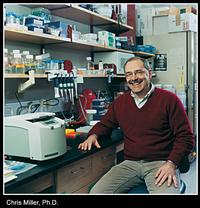 Miller spends most of his time studying the structure and function of ion channels, membrane proteins involved in electrical signaling. However, a secondary interest was born when, as a doctoral student, he worked in the lab of an accomplished scientist he ultimately realized was a classic crackpot. Since then, Miller has developed what he calls an “epistemology of scientific crackpottery.”

An epistemology, he explains, “is a system of knowing how we know what we think we know.” He says his is designed to “distinguish the brilliant, creative, contrarian heroes of science, who move their fields forward, from the crackpots, who are also brilliant, creative contrarians.”

Miller’s epistemology proposes four scientific-outlier phenotypes: con men (and they do seem to be all men), like Hwang; mountebanks, more akin to snake-oil salesmen than working scientists; and two types of scientific heretics — heroes and crackpots.

Heretic-heroes interest Miller the most…

(Thanks to investigator Ivan Oransky for bringing this to our attention.)

BONUS: The most renowned scholar of crack pottery was the apocryphal Professor Josiah Carberry of Brown University. Professor Carberry specialized in psychoceramics (the study of cracked pots).