The Slate Star Codex blog has a curious essay called “Beware The Man of One Study“. Here’s how it begins:

But there will also be random noise caused by inevitable variation and by some of the experiments being better quality than others. In the end, we might expect something looking kind of like a bell curve. The peak will be at “weakly effective”, but there will be a few studies to either side. Something like this: 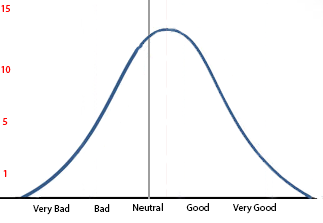