The field of ‘neuro-esthetics’ a.k.a. ‘neuroaesthetics’ can perhaps be loosely described as ‘the search for a neuronal interpretation of creativity’. Nowadays, neuro-estheticists (a.k.a. neuroaestheticians) have powerful scientific instruments at their disposal in the form of functional Magnetic Resonance Imaging (fMRI) machines. For an example of fMRI-based neuroaesthetic research, which is unique in the fact that it examines not only neural responses to authentic artworks, but also to those which have been flagged as fakes or copies, see: ‘Human Cortical Activity Evoked by the Assignment of Authenticity when Viewing Works of Art’ Frontiers in Human Neuroscience, 2011; 5: 134. 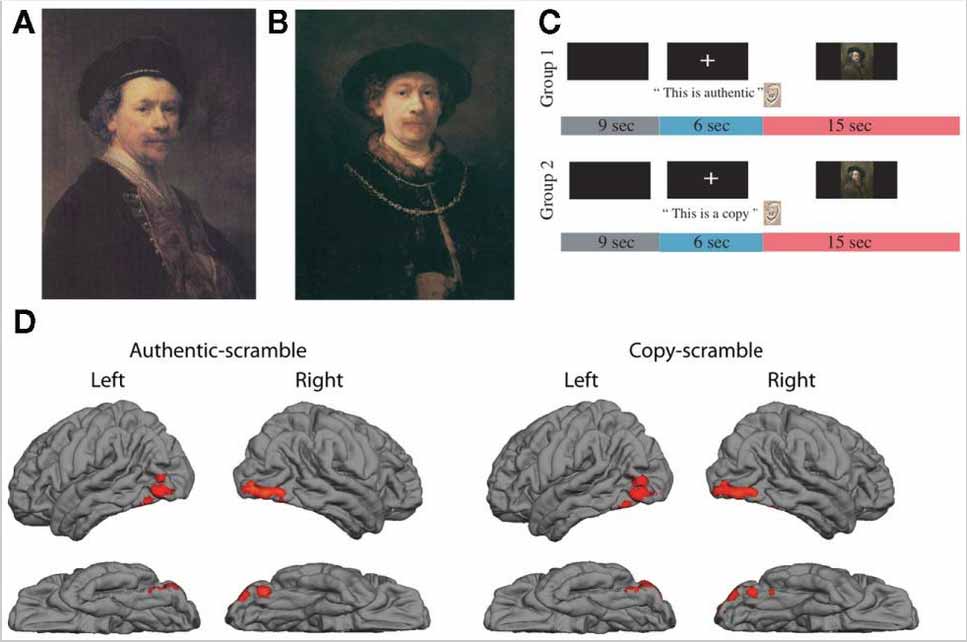 “Using functional magnetic resonance imaging, viewing of artworks assigned as ‘copy,’ rather than ‘authentic,’ evoked stronger responses in frontopolar cortex (FPC), and right precuneus, regardless of whether the portrait was actually genuine.”

“Viewing of portrait art elicited the predicted activation in lateral visual cortical areas, corresponding to regions sensitive to faces and object recognition. However, these areas were not differentially activated by the cue of authenticity. Other areas were significantly activated by the assignment of authenticity, including the right FPC, right middle temporal gyrus, right precuneus, and orbitofrontal cortex.”

BONUS: A trailer for the 1974 Orson Welles file ‘F for Fake’