Michael J. Raven of the University of Victoria presents his view of a particular view of lunatics: 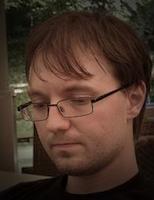