Beer foam, as a subject of experimental inquiry, will be on tap at a physics meeting next week:

“When a liquid-filled container is set in motion, the free surface of the liquid starts to slosh, i.e. oscillate. Such effects can be observed when a glass of water is handled carelessly and the fluid sloshes or even spills over the rim of the container. However, beer does not slosh as readily, which suggests that the presence of foam could be used to damp sloshing. In this work, we study experimentally the effect on sloshing of liquid foam placed on top of a liquid bath in a Hele-Shaw cell. We generate a monodisperse 2D liquid foam and track its motion. The influence of the foam on the sloshing dynamics is characterized: 2 to 3 layers of bubbles are sufficient to significantly damp the oscillations. For more than 5 layers of bubbles, the original vertical motion of the foam becomes mainly horizontal. We rationalize our experimental findings with a model that describes the foam contribution to the damping coefficient.”

Rachel Nuwer, in Smithsonian magazine, writes about it under the headline “Physicists Explain Why Coffee Is More Prone to Spills Than Beer“:

Just as solid foam reduces noise by absorbing sound waves, liquid foam does the same for motion. The researchers discovered foam’s insulating effects by performing controlled lab experiments on coffee and beer. They used high speed cameras to record the waves of motion that rocked through the surface of coffee, an amber beer and Guinness. The more foam that was present, they observed, the more energy was absorbed and the less sloshing occurred. While the researchers found that just a few layers of bubbles were enough to make a difference for slosh, not all beers were equal in their spillage reduction.

BONUS: The 2012 Ig Nobel Prize for fluid dynamics was awarded to Rouslan Krechetnikov and Hans Mayer for studying the dynamics of liquid-sloshing, to learn what happens when a person walks while carrying a cup of coffee. They documented their research, in the paper “Walking With Coffee: Why Does It Spill?” Hans C. Mayer and Rouslan Krechetnikov, Physical Review E, vol. 85, 2012.

UPDATE: Lead author Alban Sauret emailed, informing us that co-author Emilie Dressaire’s name had been left out of the APS citation. We have added it here. Sauret (who, it turns out, attended the recent Ig Nobel Prize ceremony) also sent us these action photos from the research, which involved both coffee and beer: 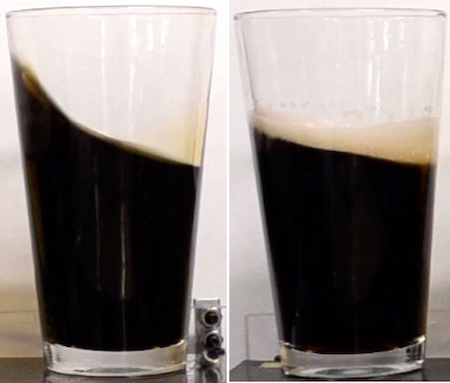 UPDATE (somewhat related): Further on the physics of froth