Neighbors sometimes come together in unexpected ways. This study shows it happening with seals and penguins:

“We describe three new occurrences of the sexual coercion of king penguins (Aptenodytes patagonicus) by Antarctic fur seals (Arctocephalus gazella) on sub-Antarctic Marion Island. These recurrent observations follow a common pattern where the seal chases, captures and mounts the penguin, followed by copulation attempts. These observations are similar to a previously published observation from the same island, and we suggest that this may be an emergent behaviour.”

Here’s further detail from the study (the online version of which contains three action videos): 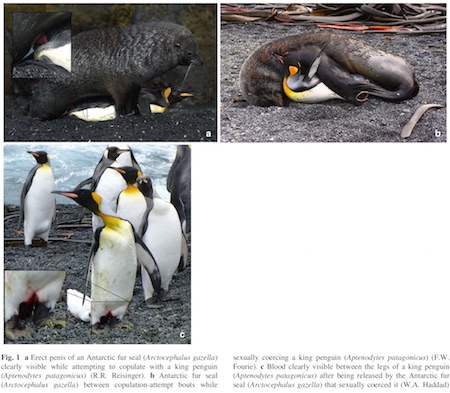 The authors hazard guesses as to why this happens.

Matt Walker provides still additional details, in a report for the BBC: “Fur seals have been caught engaging in an extreme form of sexual behaviour. Specifically, trying to have sex with penguins“. The report includes one of those action videos, which is of a kind some Americans call “must-see TV”.