Historians, most of them, agonize over how much to trust the work of earlier historians. The Got Medieval blog writes of one terrible bout of agonizing: 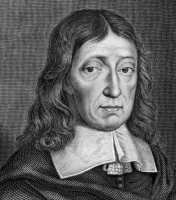 … Indeed, a reputation as a bungler who doesn’t know his patronyms (son of the horrible one/Uther) from his epithets (horrible son) is about the best that Geoffrey could hope for during his three centuries in disgrace.  Once a historian realizes, as Milton [pictured here] did sometime between 1638 and 1670, that Geoffrey was an outrageously inventive and brazen liar and that his History [a glimpse of which is shown here, below] is almost complete fabrication from beginning to end, repudiation usually gives rise to open contempt. As our awareness of the scope of his lies increases, it becomes increasingly hard to credit Geoffrey with anything original, and this is, in part, the reason so many are willing to hypothesize into existence a vast, internally consistent Arthurian biography floating around somewhere that Geoffrey must have copied down poorly and without giving credit….