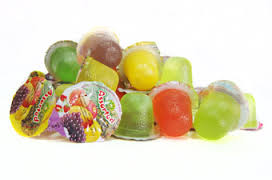 The mini-cup jelly court cases are no longer quite so far beneath the world’s “attention radar” awareness level. A new study dares to look at, and speak of, them:

“The Mini-Cup Jelly Court Cases: A Comparative Analysis from a Food Ethics Perspective,” Suk Shin Kim, Journal of Agricultural and Environmental Ethics, October 2014, Volume 27, Issue 5, pp 735-748. (Thanks to investigator Tom Gill for bringing this to our attention.) The author, at the Department of Food Science and Nutrition, The Catholic University of Korea,  explains:

“This study compares and analyzes separate court rulings in three countries on ‘mini-cup jelly’ (a firm jelly containing konjac and packaged in bite-sized plastic cups) from a food ethics perspective. While the Korean and US courts decided that the mini-cup jelly was defective, and that the manufacturers or importers were liable for damages in these cases, the Japanese court took an opposing stance in favor of the manufacturer. However, from an absolute and fundamental viewpoint, the jelly was unacceptable, ethically as well as legally, because it was unsafe, unwholesome, and unfit for children’s consumption. I argue that the ignoring or sidelining of fundamental principles of food ethics, especially “respect for life,” was at the core of these cases…. To conclude, it is very important to minimize risks by applying the principles of food ethics at the outset before any accidents can occur.”

A news headline ten years ago foreshadowed some of these developments: “EFSA risk opinion on jelly mini-cup additives could equate to full ban“