The US-based Georgia Institute of Technology (Gatech) isn’t just known for undertaking research into lethal weapons systems – far from it – it also investigates, for example, the locomotion and ‘navigation’ abilities of Mexican Jumping Beans. The beans, which are inhabited by the larvae of the moth Laspeyresia saltitans (or sometimes Cydia deshaisiana) have an unusual way of getting from A to B. 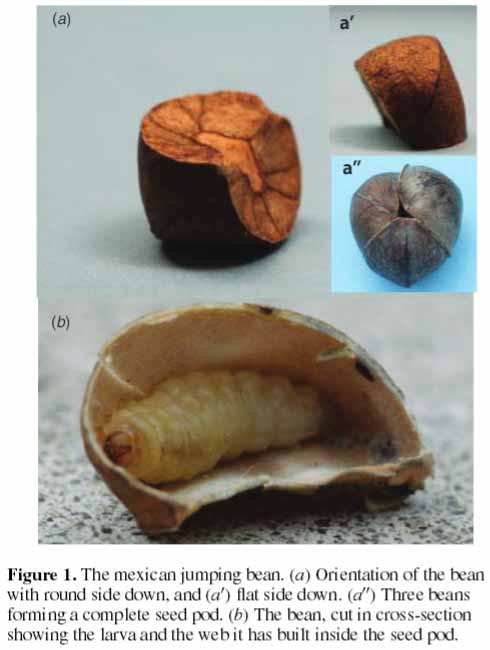 “The locomotion of the Mexican jumping bean relies on rolling, which is rare in the natural world.” explain a Gatech research team in a 2012 paper – noting too that : “Few animals rely on wheels rather than appendages …” [see bonus question below]

Observations such as these provided the impetus for a combined experimental, numerical and robotic study which investigated the beans’ unique means of rolling locomotion and their possible applicability to biomimetic micro-scale navigation systems. See: ‘Locomotion of Mexican jumping beans’ in: Bioinspiration & Biomimetics, 7, 036014 (12pp)

Bonus Question : Which (non-cyborg) animals do rely on wheels rather than appendages?