Maybe dogs and kids are a key, arriving at last, to understanding how the brain thinks thoughts and feels emotions. Maybe.

It’s still essentially a mystery how the brain (which has been called “the most complex object in the universe“) does most of what it does. The mystery is especially deep about how — specifically — thoughts and emotions work. The advent of MRI machines has made it possible to collect lots of highly detailed images that correspond — indirectly — to chemical and electromagnetic activity in the brain.  Nobody understands (except sometimes, in vague, general ways) what, if anything, most of those details explain about how the brain is doing its important doings.

A new collection of images shows indications of electromagnetochemical activity in the brains of 14 mothers while those mothers watched pictures of dogs and kids. These images are discussed in the study:

The authors, at Massachusetts General Hospital and Harvard University, explain:

“We examined fMRI brain activation patterns as mothers viewed images of their own child and dog and an unfamiliar child and dog….

“SUMMARY AND CONCLUSIONS: … These results demonstrate that the mother-child and mother-dog bond share aspects of emotional experience and patterns of brain function, but there are also brain-behavior differences”

Further details from the study: 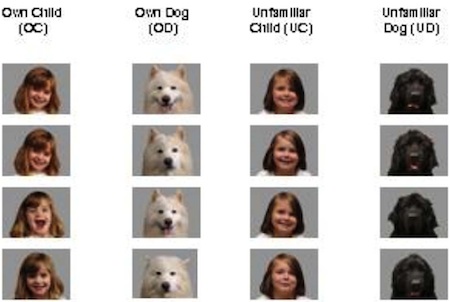 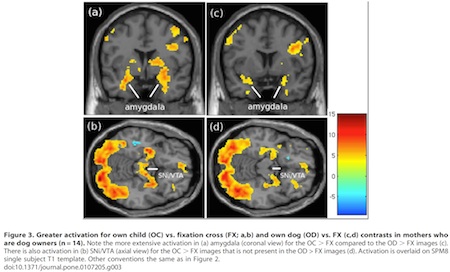 BONUS: “What we can do and what we cannot do with fMRI“