Social scientists, some of them, love to imitate and perhaps surpass what non-social scientists have done. This study may be an example (the paper does not directly indicate how social are the scientists who wrote it):

“The human dynamic clamp as a paradigm for social interaction,” Guillaume Dumas, Gonzalo C. de Guzman, Emmanuelle Tognoli, and J.A. Scott Kelso, Proceedings of the National Academy of Sciences, epub July 17, 2014. (Thanks to investigator Neil Martin for bringing this to our attention.) The authors, at Florida Atlantic University, USA and the University of Ulster, UK, explain:

“Combining mathematical and neurophysiological methods, we introduce a paradigm called the human dynamic clamp (HDC), to directly manipulate the interaction or coupling between a human and a surrogate constructed to behave like a human. Inspired by the dynamic clamp used so productively in cellular neuroscience, the HDC allows a person to interact in real time with a virtual partner itself driven by well-established models of coordination dynamics….

“The HDC not only enables to test the veracity of theoretical models, it also illuminates features that are not always apparent in real-time human social interactions and the brain correlates thereof.”

Here’s further detail from the paper: 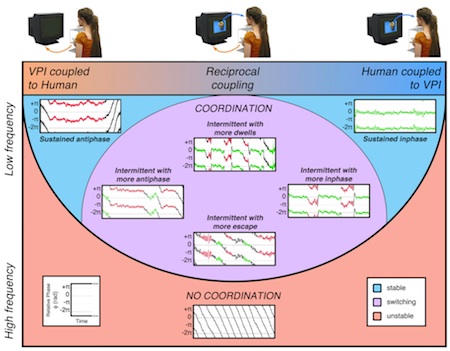