This paper qualifies in the competition, if there is one, for Research Paper with the Shortest Title. The paper is: 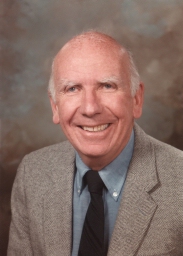 “Q“, by  Leon Knopoff [pictured here], Reviews of  Geophysics, vol. 2, no. 4, 1964, pp. 625-660.  The author, at the Department of Physics and Institute of Geophysics and Planetary Physics, University of California, Los Angeles, begins:

“Were it not for the intrinsic attenuation of sound in the earth’s interior, the energy of earthquakes of the past would still reverberate through the interior of the earth today. The chaos resulting from this awesome prospect is a speculation which lies outside the scope of this paper. Rather, it is the task here to investigate where in the earth seismic energy is converted into heat; is this performed with equal efficiency everywhere in the interior, or are some parts of the interior more capable of performing this operation than others.” 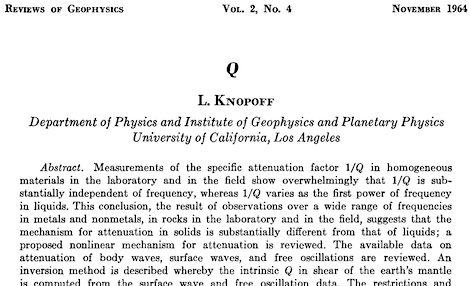 Here is a graph from the study: 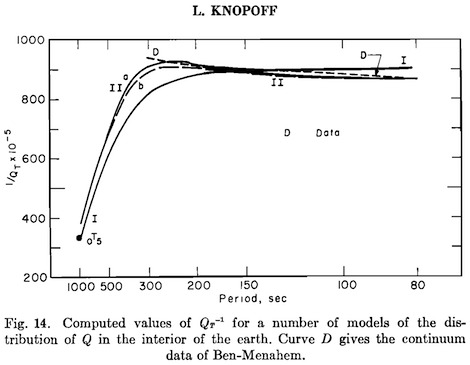 (Thanks to investigator Hezi Gildor for bringing this to our attention.)

BONUS: If you know of another top-rate research paper that have a title as short or shorter than the title of this paper, we would enjoy hearing about it.

UPDATE: That paper apparently was the first in an adventure series. A later item in that series:

“Q in the Solar System,” Peter Goldreich and Steven Soter, Icarus, vol. 5, no. 1966, pp. 375-389. (Thanks to investigator David Grinspoon for bringing this to our attention.) The authors are, or were, at the University of California at Los Angeles.

“&,” Christopher J. Mulvey, Supplemento ai Rendiconti del Circolo Matematico di Palermo, 1986.  (Thanks to investigator Lucius Schoenbaum for bringing this to our attention.) The author is at the University of Sussex.