Here’s another, very specific study of the effects, side-effects, and sometimes-wild fears about popular, refreshing beverages:

“Fifty adult male Wistar rats were divided into control group drinking water, and groups drinking different Coca-cola beverages (regular Coca-cola, Coca-cola caffeine-free, Coca-cola Light and Coca-cola Zero). Oxidative and carbonyl stress markers were measured in the testicular tissue to assess oxidative status together with testicular and plasma testosterone. StAR expression in testes as a marker of steroidogenesis was quantified. No significant differences were found between the groups in any of the measured parameters. In conclusion, oxidative and carbonyl stress in testicular tissue were not influenced by drinking any type of Coca-cola.” 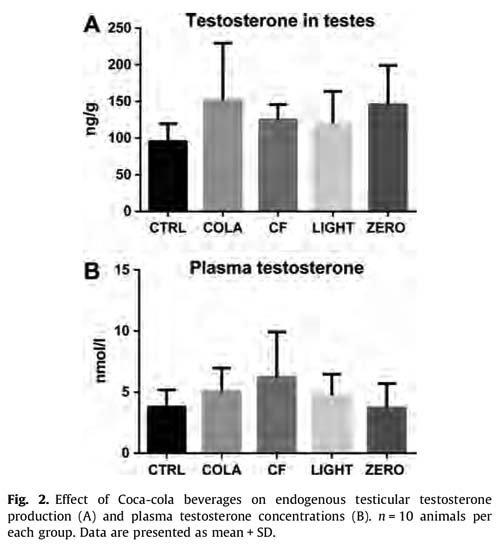 The rat study cites many other studies, including the Ig Nobel Prize-winning “The Spermicidal Potency of Coca-Cola and Pepsi-Cola,” C.Y. Hong, C.C. Shieh, P. Wu, and B.N. Chiang, Human Toxicology [note: the journal later changed its name, and is now called Human & Experimental Toxicology], vol. 6, no. 5, September 1987, pp. 395-6. Here’s video of Dr. Deborah Anderson, chief author of that spermicide study, at the Ig Informal Lectures, at MIT, two days after she was awarded the Ig Nobel Prize:

“The present paper describes the outbreak of health complaints that occurred in Belgium, in June 1999, among schoolchildren and members of the general public in relation to the consumption of Coca-Cola and other soft drinks. The outbreak took place in the wake of a major food crisis, caused by PCB/dioxin contamination of animal feed, that had erupted shortly before. The clinical features (absence of serious poisoning) and epidemiological characteristics of the Coca-Cola outbreak pointed to mass sociogenic illness, and no subsequent toxicological or other data have refuted this hypothesis.”

This a map from that study: 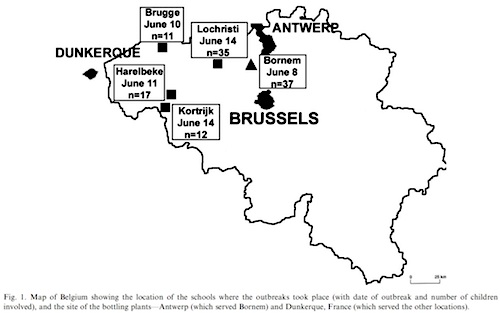