Tickets for the 2014 Ig Nobel Prize ceremony will go on sale TUESDAY, JULY 8, at noon (US eastern time). Tickets sell out rapidly, so we advise you to get them sooner, rather than not be able to get them later.

Tickets will be available exclusively from the Harvard Box Office — online, by telephone (+1 617-496-2222), and in person at the Holyoke Center ticket window (1350 Massachusetts Ave, Cambridge).

Ig Glorious tickets: $150.
We fund the ceremony (theater rental, and half a zillion other expenses) mainly through ticket revenues. This year we are offering a few special “Ig Glorious” tickets, for persons who want to be specially supportive. Ig Glorious tickets come with special perks: Excellent seats; An Ig Nobel poster, signed by at least one Ig Nobel Prize winner; A vintage Ig Nobel t-shirt; Their photo taken at the Ig Nobel lectern on stage (before or after the ceremony, at the discretion of the Stage Manager); Access to our Ig Glorious Liaison, a staff member assigned to the “Ig Glorious” group for the entirety of the event; And a hearty handshake!

You can download a PDF version of the 2014 ceremony poster, by right-clicking on the image: 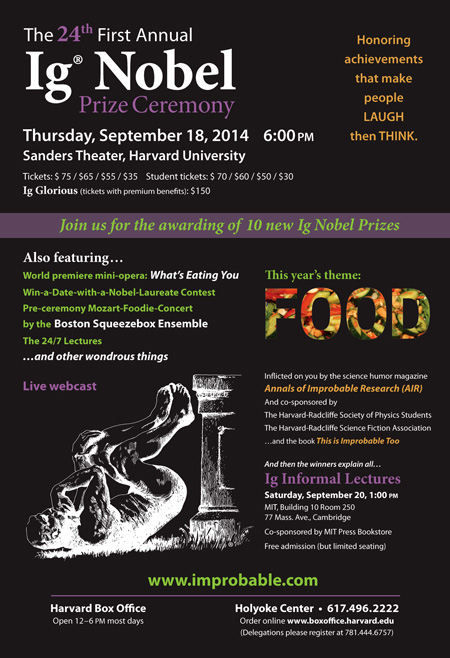 Here are two videos of last year’s — 2013 — Ig Nobel Prize ceremony. The first video is the official recording, more or less as it was webcast live. The second video, which you may find frustrating to watch, is the alternate video feed, from our unofficial NSA Courtesy Cam. (Yes, we will again be providing two live webcast  feeds for this years’s ceremony on September 18, 2014!)