“some industrial food waste or recycled waste materials generate heat as a result of fermentation and oxidation, which leads to an increase in temperature during storage and transport, ultimately resulting in spontaneous ignition. In this study, we examined the fermentation and heat generation by soy sauce squeezing residue (SSSR) produced during the brewing of soy sauce and by the fish meal produced during the processing of fish residue….

“The heat of combustion was measured using a bomb-type calorimeter (IKA C2000) in order to understand the combustion severity and risk of fire in the sample. Approximately 500 mg of the sample was completely burned inside the bomb cylinder, which was filled with hyperbaric oxygen. The heat generated was completely absorbed by the water in the tank surrounding the cylinder, and the heat of combustion was measured. A schematic of the C2000 is shown in Fig. 6.” 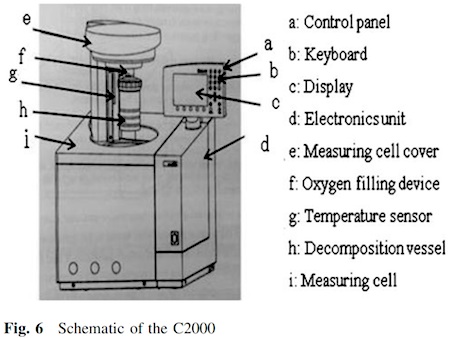