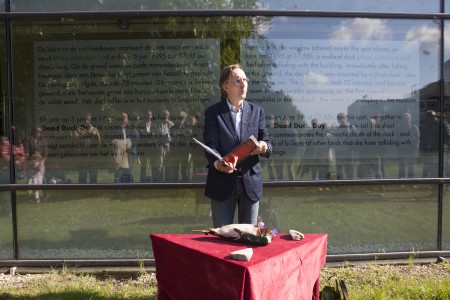 June 5th 2014 was the 19th Dead Duck Day (here is a full, ilustrated report). Since 2010 a leading scientist or science writer is invited to send in the Special Dead Duck Day Message. So far, over the years, Daniel Klem jr, Patricia Brennan, Tim Birkhead and Carin Bondar have contributed. This year’s special DDD message was sent in by Linda Lombardi (pictured below), author of the book (and blog) Animals Behaving Badly. The message was read aloud to the assembled crowd:

Human beings have the strange idea that no other animal has sex solely for pleasure. But if our fellow creatures only care about the perpetuation of the species, why do they do it in so many ways that don’t result in babies? From manatees to manakins, all kinds of animals get it on with members of the same sex, and many have figured out that if you’ve got a stick, a rock, or a prehensile tail, who needs a partner?

As I collected material like this for my book Animals Behaving Badly from the comfort of my office, I came to admire the people who observe and report the sordid truth about the sex lives of the animal kingdom. When I read about a black-winged stilt pleasuring itself with a piece of driftwood, twenty or thirty times at a go, every thirty seconds, I thought about the researcher who carefully recorded this data. Were her feet wet? Was she regretting her decision not to go to medical school instead?

But no one inspired me more than the man who had the fortitude to observe for a full seventy-five minutes the spectacle of the homosexual rape of a dead duck – and then, because it was time for dinner, said, Enough is enough, collected his specimen, and went home. Kees Moeliker knows that if we all waited to eat till animals stopped behaving badly, we’d starve to death. And if that’s their wicked plan to drive the human race to extinction, he won’t let them get away with it. [Linda Lombardi, June 5th 2014]

A full report of the 19th Dead Duck Day, including photographs by Anjès Gesink, can be read and seen here. For a brief history of Dead Duck Day, visit www.deadduckday.com.

BONUS [possibly unrelated]: “We Are The World”: