Blustery academia sometimes coughs up a perfectly delight-filled storm of assumptions. With that quasi-thought in mind, can you count the assumptions in this new study? The study is:

Here’s one, not atypical, chunk of the study:

“Experiment 6. Participants. A total of 201 students at the University of Illinois at Urbana–Champaign participated for course credit (age, 18–24 y; 113 females).

“Stimuli and procedure. Participants were randomly assigned to one of two conditions: Hurricane Alexander vs. Hurricane Alexandra. The procedure was identical to experiment 5 [“Participants reported intentions to follow a voluntary evacuation order…”] with the following exception. After reporting evacuation intentions, participants completed two unrelated tasks for about 20 min and then reported their gender-trait beliefs.”

If you’d like a head start in counting those assumptions, read this essay by Ed Yong.

The studies in PNAS are peer reviewed. Keep this study in mind the next time you hear someone explain the intrinsic worth, power, and majesty of the peer review process.

(Thank you to the sudden deluge of persons who alerted us to the existence of this study.)

UPDATE: The University of Illinois issues a proud press release, accompanied by this photo of three of the four proud co-authors: 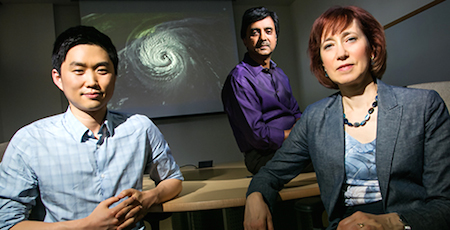 UPDATE (June 3, 2014): The study authors, reacting to a swirl of derision from statisticians and other scientists who examined that study, double down, sticking up for the rectitude of their accomplishments.

BONUS (June 4, 2014):  Bob O’Hara & GrrlScientist, writing in The Guardian, have at the statistics in the study. Jeremy Freese has at those statistics.

“Reply to Christensen and Christensen and to Malter: Pitfalls of erroneous analyses of hurricanes names,” Proceedings of the National Academy of Sciences, vol. 111 no. 34, 2014,  E3499–E3500.

UPDATE (January 11, 2016): Gary Smith, at Pomona College, has further analyzed the study, writing both in his blog and in a formal study:

“It has been argued that female-named hurricanes are deadlier because people do not take them seriously. However, this conclusion is based on a questionable statistical analysis of a narrowly defined data set. The reported relationship is not robust in that it is not confirmed by a straightforward analysis of more inclusive data or different data.”