At one time, some people believed that giant catfish caused earthquakes in Japan. This belief led to the production of artworks of those catfish in thought and action. The University of British Columbia has, in its art collection, some of these works. They explain:

A number of the prints in this collection feature catfish, known as namazu in Japanese. These can be incredibly confusing when first encountered, both in the “What is that thing?” way (as they frequently have both arms and legs) and the “How is this related to disasters?” way. Things become clearer upon discovering that a giant namazu was blamed for the 7.0 earthquake that happened below Edo (now known as Tokyo) in November, 1855. Just days after this event ukiyo-e woodblock prints depicting giant catfish began to be produced and sold.

The Namazu was supposed to be a giant catfish who lived underground, pinned beneath the foundation stone of a local shrine by the god Kashima. However, when Kashima failed at his task (due to being at a gathering for various gods) the Namazu was able to thrash around and cause much destruction in the form of earthquakes.

Here’s a painting that depicts, says the UBC web site, a “song to ward off earthquakes caused by catfish”: 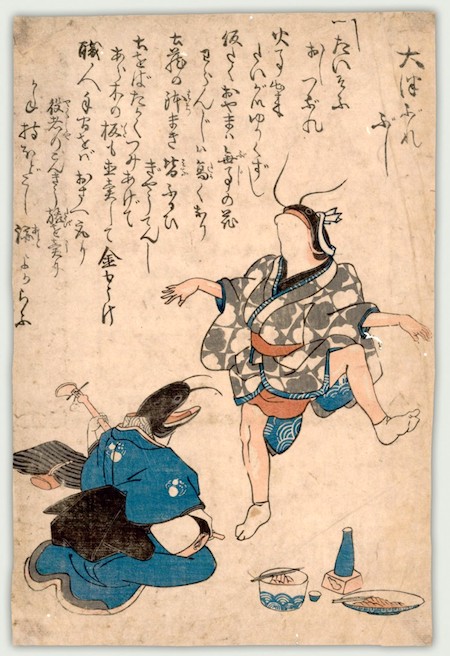 UPDATE: The History of Geology web site explores the subject in an article called “Namazu: The Earthshaker“, by @David_Bressan. (Thanks to @sageaenna for bringing it to our attention.) FURTHER UPDATE TO THAT UPDATE: “An Essential Field Guide to North American Earthquake Beasts”

FUN FACT: In 1994 we awarded an Ig Nobel Prize in physics to a government agency “for its seven-year study of whether earthquakes are caused by catfish wiggling their tails.” However… we later discovered that the documentation for that was suspect. We had relied entirely on press accounts (from usually-reliable sources). When we found ourselves unable to verify those press reports, we retracted that prize. That incident taught us to be more careful about doing our homework before selecting winners.