Three things — (1) gardeners, (2) snails, and (3) the question of whether the latter (not the former) have a homing instinct — dominate the narrative in this new study:

“It has frequently been reported that snails that are marked and removed from a garden are later found in the garden again…. We report a systematic study of the snail population in a small suburban garden, in which large numbers of snails were marked and removed over a period of about 6 months. [We] infer the existence of two groups of snails in the garden: members of a larger population that show little affinity to the garden itself, and core members of a local garden population that regularly return to their home if removed. The data are strongly suggestive of a homing instinct, but also reveal that snail-throwing can work as a pest management strategy.” 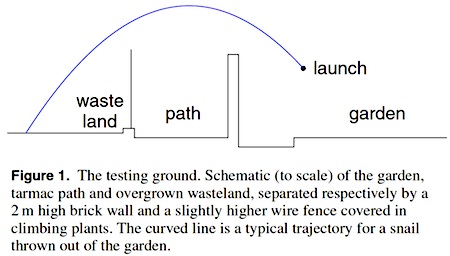 Karen Kaplan reports further details in the Los Angeles Times, under the headline “Snails in your garden? Warm up your throwing arm, scientists suggest“.

BONUS: A set of now-old-fashioned guidelines for dealing with snails and slugs in one’s garden