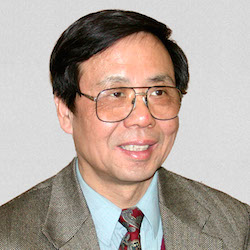 A bold physicist is about to present his plan — a bold plan — to build gigantic walls to protect people and property against tornadoes. The physicist is none other than Rongjia Tao, chair of the physics department at Temple University. Here’s notice about his planned announcement:

Session Q30: The Physics of Climate

Abstract: Q30.00009 : Can We Eliminate the Major Tornado Threats in Tornado Alley?

“The recent devastating tornado attacks in Oklahoma, Iowa, Nebraska, and South Dakota raise an important question: can we do something to eliminate the major tornado threats in Tornado Alley? Violent tornado attacks in Tornado Alley are starting from intensive encounters between the northbound warm air flow and southbound cold air flow. As there is no mountain in Tornado Alley ranging from west to east to weaken or block such air flows, some encounters are violent, creating instability: The strong wind changes direction and increases in speed and height. As a result, it creates a supercell, violent vortex, an invisible horizontal spinning motion in the lower atmosphere. When the rising air tilts the spinning air from horizontal to vertical, tornadoes with radii of miles are formed and cause tremendous damage. Here we show that if we build three east-west great walls in the American Midwest, 300m high and 50m wide, one in North Dakota, one along the border between Kansas and Oklahoma to east, and the third one in the south Texas and Louisiana, we will diminish the tornado threats in the Tornado Alley forever. We may also build such great walls at some area with frequent devastating tornado attacks first, then gradually extend it.”

(Thanks to investigator John Ptak for bringing this to our attention.)

BONUS: A television station in Tornado Alley reacts to the proposal.