Given the current interest in the implications of automated computer analysis of voice recordings, say for example telephone calls, it’s perhaps not surprising that some might have thought about disguising their voice to (try to) avoid recognition and/or obfuscate the content. But those who work professionally in the voice-recognition field have been investigating such nefarious methodology for more than a decade. In a now-classic paper on the subject published as long ago as 2000, authors professor Robert D. Rodman and Michael S. Powell of the Department of Computer Science at North Carolina State University, US, listed more than 20 viable types of voice disguise techniques. They include, for example:

An video example of which is available here. Compare and contrast various phrases with and without pipe.

See: ‘Computer Recognition of Speakers Who Disguise Their Voice’ in : Proceedings of the International Conference on Signal Processing Applications & Technology 2000 (ICSPAT2000), October, 2000.

BONUS: “Facilitating fashion camouflage art,” Ranran Feng [pictured below, partially camouflaged] and Balakrishnan Prabhakaran, MM ’13 Proceedings of the 21st ACM international conference on Multimedia. (Thanks to investigator Florian Gallwitz for bringing this to our attention.) The authors, at the University of Texas at Dallas, Richardson, explain:

“Artists and fashion designers have recently been creating a new form of art — Camouflage Art — which can be used to prevent computer vision algorithms from detecting faces. This digital art technique combines makeup and hair styling, or other modifications such as facial painting to help avoid automatic face-detection. In this paper, we first study the camouflage interference and its effectiveness on several current state of art techniques in face detection/recognition; and then present a tool that can facilitate digital art design for such camouflage that can fool these computer vision algorithms. This tool can find the prominent or decisive features from facial images that constitute the face being recognized; and give suggestions for camouflage options (makeup, styling, paints) on particular facial features or facial parts. Testing of this tool shows that it can effectively aid the artists or designers in creating camouflage-thwarting designs. The evaluation on suggested camouflages applied on 40 celebrities across eight different face recognition systems (both non-commercial or commercial) shows that 82.5% ~ 100% of times the subject is unrecognizable using the suggested camouflage.” 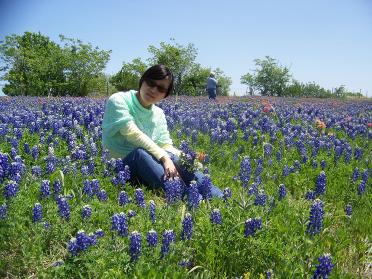 The web site cvdazzle.com further explains the technology, and shows examples of what it accomplishes: 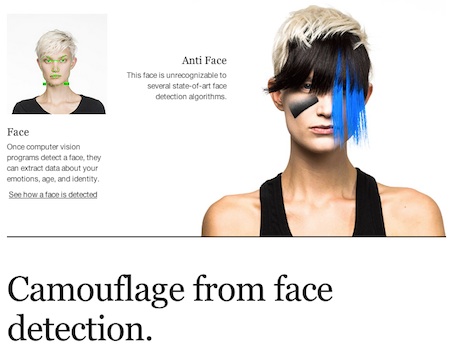 BONUS (related to the above bonus): Flashy ways to foil paparazzi