Improbable recently drew attention to the latest research into the (possibly negative) implications of holding a door open for others. But what if the door which is open for you is automatic? As a 2009 article in the International Journal of Design put it: 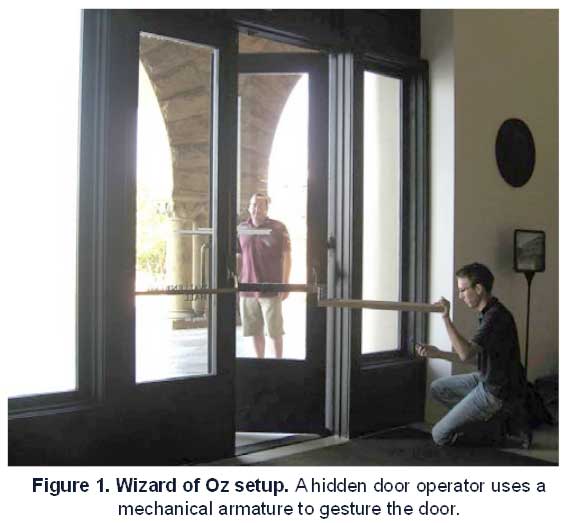 A joint research team from California College of the Arts and Willow Garage Inc. set up two experiments to investigate. In the absence of a multi-programmed selection of fully automated double doors, they constructed instead what they called a ‘Wizard of Oz setup’ – in the sense that, in reality, the door had a hidden human operator pushing it open and closed with a stick. (see photo)

How would different ‘door gestures‘ be regarded by door-users ? To find out, three different styles of door-opening were appraised via a questionnaire (Slow – Slow with Pause – Slow Open then Quick Shut) :

“These two experiments indicate that door trajectory is a key variable in the doors’ expression of welcome; door speed and the context in which the door is opening acting as amplifying factors influencing people’s emotional interpretation of the door’s gestures.”