Some maintain that dogs often tend to look like their owners (and vice versa). If you subscribe to that viewpoint, you might also go on to ask – ‘Which part of the face is critical for such an impression to arise?’ This question has been tackled in new research published in the latest edition of Anthrozoὂs: A Multidisciplinary Journal of The Interactions of People & Animals, (Volume 26, Number 4). Professor Sadahiko Nakajima of the Department of Integrated Psychological Science at Kwansei Gakuin University Hyogo, Japan, has conducted an extensive experimental investigation, and presents the results in : ‘Dogs and Owners Resemble Each Other in the Eye Region’ 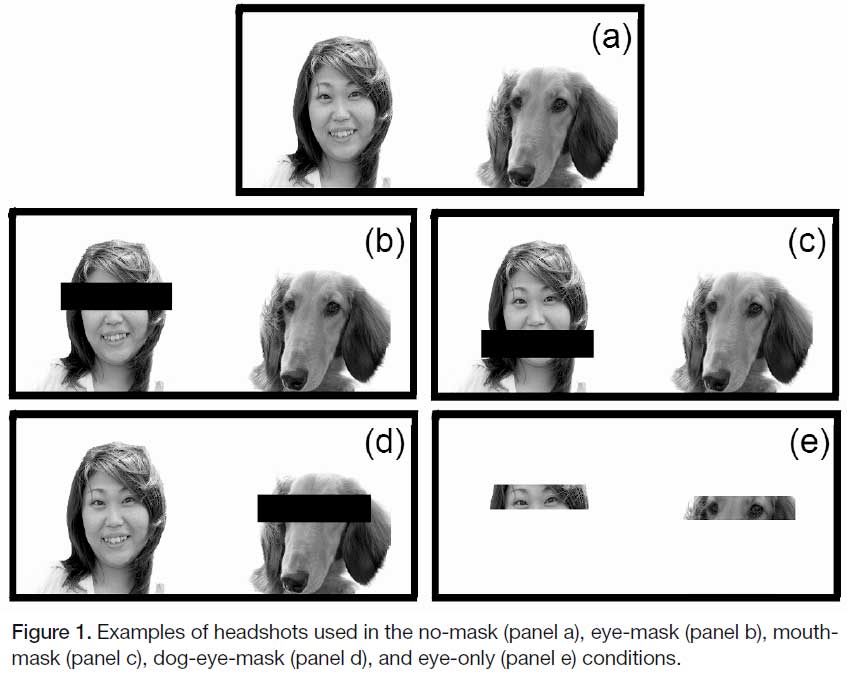 “Although several studies have shown perceived facial resemblance between photos of purebred dogs and their owners, none of these studies has clarified which part of the face is critical for such an impression to arise. The series of experiments presented here identified the critical feature underlying the perceived dog–owner facial resemblance. In total, 502 Japanese undergraduate students participated in the study. Two sets of 20 dog–owner photo pairs had been color-printed on a test sheet: the dogs varied in breed and the owners were Japanese males and females in their twenties to sixties who were unknown to the participants. One set comprised real pairs, while the other was a fake set (i. e., each dog was paired with another dog’s owner). As in a previous study, the majority of participants (from two-thirds to three-quarters) reported that the former set was more similar than the latter. This was also the case even when the mouth regions of the owners’ faces were masked by black bars. However, masking the eye regions of either dogs or owners reduced the choice performance to a chance level of around 50%. Furthermore, choice performance was equally good and above the chance level, regardless of whether the entire faces were shown or only the eye regions of the dogs and owners were visible. These results strongly suggest that dogs and owners resemble each other in the eye region. This finding also ruled out the possibility that any nonphysiognomic features (e. g., owners’ hairstyles and people’s stereotypical concepts about dog ownership) or similarity of obesity are determinate for the perceived dog–owner resemblance.”

If you don’t have access to the full file, a press release (in Japanese) is available here.

[2] The double apostrophe in the title reflects the uncertainty of whether the dog or dogs in question have just one owner, or plural owners.