A team of physicists and mathematicians attempted to apply their physics knowledge to understanding how divorced couples can better deal with custody of the children:

“The physics of custody,” Andres Gomberoff, Victor Munoz and Pierre Paul Romagnoli, arXiv:1305.0935v3, December 19, 2013. (Thanks to investigator Judith Weaver for bringing this to our attention.) The authors, at Universidad Andres Bello and Universidad de Chile, Santiago, Chile, explain:

“The use of techniques borrowed from mathematics and physics in tackling problems of social sciences has a long history…. Divorced individuals face complex situations when they have children with different ex-partners, or even more, when their new partners have children of their own. In such cases, and when kids spend every other weekend with each parent, a practical problem emerges: Is it possible to have such a custody arrangement that every couple has either all of the kids together or no kids at all? We show that in general, it is not possible, but that the number of couples that do can be maximized. The problem turns out to be equivalent to finding the ground state of a spin glass system, which is known to be equivalent to what is called a weighted max-cut problem in graph theory, and hence it is NP-Complete.” 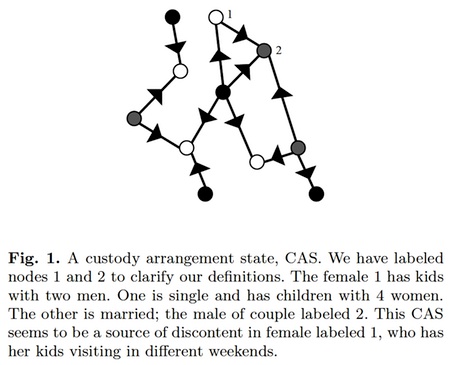