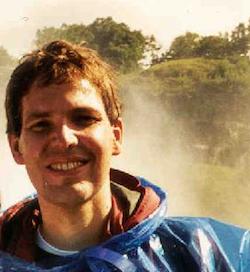 Nothing you can say about Rien can obscure the fact that Rien is obsessed with voids. Rien is at the University of Groningen. Rien is Rien van de Weygaert. Rien co-authored this study:

“A hierarchy of voids: much ado about nothing.” R.K. Sheth and Rien van de Weygaert [pictured here], Monthly Notices of the Royal Astronomical Society, vol. 350, no. 2, 2004, pp. 517-538. Rien is at the University of Groningen, the Netherlands. Rien and his co-author, who is not Rien, remark:

“We present a model for the distribution of void sizes and its evolution in the context of hierarchical scenarios of gravitational structure formation. We find that at any cosmic epoch the voids have a size distribution that is well-peaked about a characteristic void size that evolves self-similarly in time…. in our model, the void size distribution is a function of two parameters, one of which reflects the dynamics of void formation, and the other the formation of collapsed objects.”