Listen to it on an NPR station, if you’re near one, or on the Internet.

The photo below shows (just!) some of the 2013 Ig Nobel Prize winners, the Nobel laureates who handed out the prizes, the 24/7 Lecturers, and the cast and the medical-all-stars orchestra of the mini-opera ‘The Blonsky Device’. (If you look carefully, you can spot the baby that was born at the thrilling, centrifugal-force-filled conclusion to the opera!). Mike Benveniste took this photo: 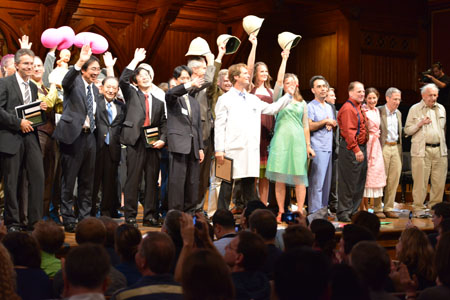 BONUS: The special Ig Nobel 2012 issue of the Annals of Improbable Research