There are many ways to clean a machine gun. Some of those ways are better than the one described in this study:

“A 35 year–old man was admitted to emergency department with a complaint of injury related to the third web space, third finger pulp and thenar region of right hand. On detailed questioning, he reported that he was cleaning a machine gun (type MG-3) after target practice in a shooting range. He didn’t check visually and physically whether there were any bullets or not in the chamber. The remaining bullet in the chamber was ignited during the cleaning process when he pushed the rod through the barrel (Fig. 1).”

Here is Figure 1 from the study: 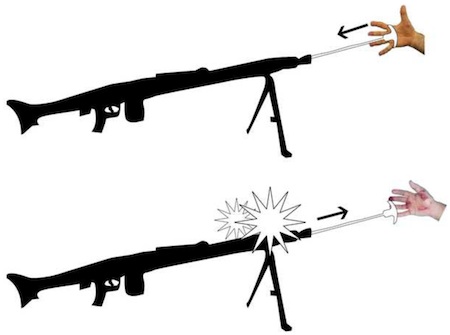 BONUS (unrelated): Video of how to fire an MG3, with rock music:

BONUS (November 26): “An Anderson County man accidentally shot himself in the hand Sunday night when he tried to force the wrong caliber of ammunition into his pistol.“