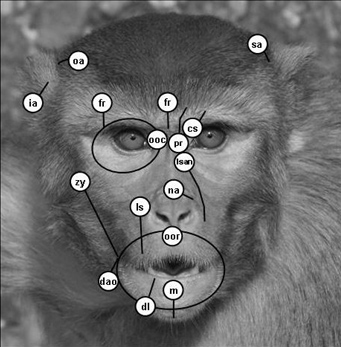 Ekman isolated the wink, you see.

In 1976 the Facial Actions Coding System [FACS] was developed by Paul Ekman and colleague Wallace V. Friesen. It featured in their paper for the inaugural issue of Environmental Psychology and Nonverbal Behavior, 1(1), pp. 56-75, which was entitled ‘Measuring Facial Movement’. The Facial Action Code was derived from an analysis of the anatomical basis of facial movement – and described a comprehensive set of ‘Action Units’ which can, it’s said, be used to describe any facial movement in humans.

But, in the last 37 years or so, the concept has been taken several steps forward – in that it’s no longer restricted to humans. See (for example):

• MaqFACS  from which the picture above is taken.

BONUS: Quite a few of Professor Ekman’s peers are less than enthralled with the professor’s work.