The Jablonski diagram, first introduced by Aleksander Jabłoński in 1933, is a graphical depiction of the electronic states of a molecule and the transitions between those states. The y axis of the graph is energy, which increases from the bottom (ground state or S0) to the top (singlet and triplet excited states or Sn and Tn). The transitions between the states—like excitation, internal conversion, fluorescence, intersystem crossing, etc—are depicted as arrows. Because of its simplicity, the Jablonski Diagram is a starting point for many discussions about the events that occur following electronic excitation of a molecule.

[MANY EXAMPLES, not shown here — SEE THEM ON THE BLOG]

… And, finally, is “Jablinko!” This Jablonski diagram is based on the Japanese arcade and/or gambling game known as Pachinko. This photophysics-based game begins by placing a small metal ball into the S0 hole just above the lever. Pulling the lever, or exciting the molecule, shoots a ball to the top of the board into the singlet excited state. The ball (excited state) can fall one of three possible directions, NRD (non-radiative decay), ISC (intersystem crossing) or fluorescence. If it undergoes ISC, the ball can then fall into a potential well representing either non-radiative decay or phosphorescence from the triplet excited state. To top it all off, when the ball falls in to the fluorescence or phosphorescence holes it closes an electrical circuit that turns on a blue or red LED below the potential well. Those colors are the emission wavelengths for fluorescence and phosphorescence from anthracene. 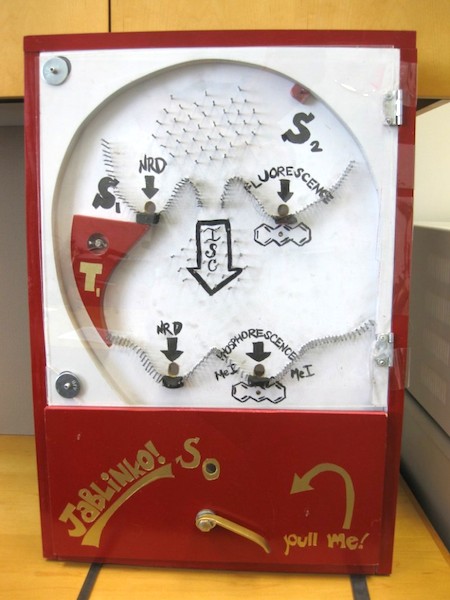